The Show Begins at 5…

Posted on August 5, 2015 by RichSimmondsZA

Another great story from the African Bush 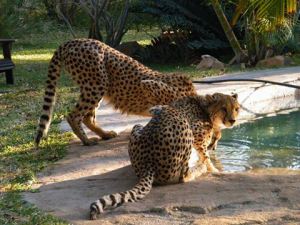 We came across the cheetah boys (Pakisha & Gijima) on an afternoon drive (27/2) – they were lying in a small clearing among some thorn trees, relaxing with VERY full stomachs after having stuffed themselves eating the Impala ram they had brought down. Lying like typical cats, they hardly even raised their heads to look at us as we pulled up near to them.

(Am thinking of changing their names to Fifa & World Cup – with full stomachs like that, they look as if they have swallowed footballs!)

We enjoyed observing them doing nothing for a while, and were about to move off when a black-backed jackal appeared on the edge of the scene. Gijima saw him, and flattened his ears, looking at the jackal with a fierce scowl. The jackal wisely ignored the cat, and lay down under a nearby thorn tree.